ASX rises then falls then recovers slightly to close down 8 points at 5362 as banks suffer from a break out of hostility in the investor loan market. Resources shine. Volume remained low at under $4bn. Japan weaker down 1 % as China and Hong Kong closed. AUD 74.64 cents and US Futures down 15.

After a strong start to the session and a high of 5386 before the inevitable happened as resources tried valiantly to hold up the market Atlas like before the financials fell into a whole lot of trouble.

The profit downgrade from Amcor (AMC) -% coupled with Surfstitch (SRF)-% did nothing to endear confidence either and the market fell backwards to close at 5340 as it continues to struggle in this rarefied atmosphere.

Resources once again were the place to be especially base metal producers like Western Areas (WSA)+% and Independence Group (IGO)+%.

Banks were not so lucky. We have currency wars and now we have mortgage wars as Commonwealth Bank (CBA) has announced plans to lure investors to their cunning investment loan trap with an offer too good to refuse.

Seems that all that bite from APRA is now being ignored as banks compete for limited business.

South Korea’s central bank has unexpectedly cut the benchmark interest rate to a new record low as inflation has fails to accelerate and exports are far from a rebound. 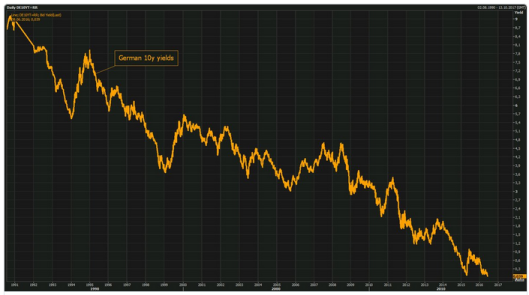 A devoted wife had spent her lifetime taking care of her husband. Now he had been slipping in and out of a coma for several months, yet she stayed by his bedside every single day.
When he came to senses, he motioned for her to come near him.
As she sat by him, he said, “You know what? You have been with me all through the bad times. When I got fired, you were there to support me. When my business failed, you were there. When I got shot, you were by my side. When we lost the house, you gave me support. When my health started failing, you were still by my side. You know what?”
“What dear?” she asks gently.
“I think you bring me bad luck.”

Have a great day/night!

A word from our sponsors.

Putting the band back together-