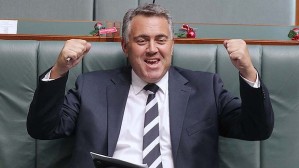 Jokin Joe called it..Iron Ore bounced another 1.6% last night…on a tear…Negative gearing off the agenda according to the head forecaster too!!!Oil improving too as the Saudis bomb Yemen again…good for resource stocks all round..even Gold was up too…

Anyway another day stuck in the by-water yesterday as Asian markets seem to be where it’s at..scary numbers from China(see below).

The big driver of our market is losing power..banks make up nearly 35% of the index and together with TLS have been the turbo charge to the ASX 200 taking it to close to 6000…that’s seems to be changing…resources have a long way to catch up..BHP/RIO/FMG were $100 back in September 11…now $89…these need to turn around if we have any hope of another leg up…so Iron Ore and Oil is crucial…Banks are gearing up for their results due early May along with the budget so likely to remain a little unloved…

Few macro things out there holding back my enthusiasm and believe that we are range bound 5700 to 6000 for the next quarter…UK election, Greece, rate Cuts(not) Budget, TA and JH a big hindrance and the high dollar and a useless RBA… plus US profits are hardly spectacular unless you are a tax dodging global net company who is dodging the tax man wherever… apart form that it’s all good..

Brent Crude at $64 a barrel…Time to look at STO…everyone hates this stock and talking equity issues but with the rebound in the oil price I reckon we could see them back over 8.20 again…site visit too this week so nothing to hide or lining everyone up for a shoulder tap??/We shall see but could be an easy 5-6% upside in this next week…

Good to see Stream Group which I wrote about yesterday and the day before…up from 10 to 13 c yesterday…who said storms don’t pay!!

The UK guy that spoofed the market with fictional orders who the US feels is responsible for the 2010 flash crash said in his defence that he changed his mind a lot!!!Good defence mate!!

Ze Germans at Deutsche bank have been hit with a record fine for fixing the LIEBOR rate at over $2.5bn!!!Ouch!!Hope it was worth it…

Captain Snore.. Resmed has reported a slight decline in gross profit for the March quarter of $251.4 million – down slightly from $251.7 million for the same quarter in 2014.May be a downer for the stock!!!

NASDAQ has shaken off the bogey man after 15 years with a new high last night…Led by a 132-fold increase in Apple Inc. and a 13-fold jump in Google Inc., stocks in the gauge on Thursday cleared the record 5,048 and closed at 5056….

Apparently China and HK are not in a bubble…worst PMI figures for 12 months and the market takes it as a positive!!! Brokerage accounts in March, retail Chinese investors opened about 4.2 million brokerage accounts, triple the number in February and taking the total number of new accounts this year to about 8 million. That’s more than were opened in 2012 and 2013 combined!!!!!

The average daily turnover on the Hong Kong stock exchange tripled in short order, from an average of $HK87 billion ($14.47 billion) to $HK231 billion between April 8 and April 21.

The merger between Time warner and Commcast looks to be off!!

Laureate Education . ,the largest for-profit college network in the world, is interviewing banks for a $1 billion initial public offering in the U.S Laureate Education Inc. Owned at present by private equity it would be a $5bn company with 84 “Universities” mostly in emerging economies…the Foxcomm of learning!

Here’s an interesting one for those of you looking at putting some hard earned into MYOB…Xero has just announced a doubled loss for the year despite revenue up 76%!!

Netflix is changing the landscape of Aussie TV…big call I know but I reckon it is..the technology is good no ads and good content..some great shows on there and it costs 10 bucks a month..apart from sport why Foxtel??Telstra seems to have got the point as it now looks to be doing a deal with Netflix…despite being the half owner of Foxtel…the times they are a changing…

Would you buy a used stock from Private equity??? 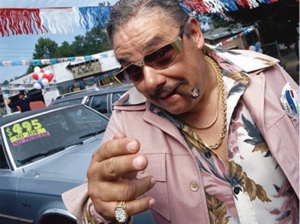 This is an interesting chart…the Dow expressed against Average weekly earnings of a blue collar worker…all time high…I guess hardly a surprise given that the index is close to an all time high anyway!!!!

It was the mailman’s last day on the job after 35 years of carrying the mail through all kinds of weather to the same neighbourhood.

When he arrived at the first house on his route he was greeted by the whole family there, who congratulated him and sent him on his way with a big gift certificate.

At the second house they presented him with box of fine imported cigars.

The folks at the third house handed him a selection of terrific fishing lures.

At each of the houses along his route, he was met with congratulations, farewells, cards, and gifts of all types and values.

At the final house he was met at the door by a strikingly beautiful young blonde in a revealing negligee. She took him by the hand, gently led him through the door (which she closed behind him), and led him up stairs to the bedroom where they had a most passionate liaison. Afterwards, they went downstairs, where she fixed him a giant breakfast: eggs, potatoes, ham,sausage, blueberry waffles, and fresh-squeezed orange juice. When he was truly satisfied she poured him a cup of steaming coffee.    As she was pouring, he noticed a dollar bill sticking out from under the cup’s bottom edge. “All this was just too wonderful for words,” he said, “…..but what’s the dollar for?”

“Well,” she said, “Last night, I told my husband that today would be your last day and that we should do something special for you. I asked him what to give you?”

He said, “…Screw him…give him a dollar.”

The blonde then blushed and said, “….but the breakfast was my idea.”

Back on Sky Biz tonight for Market moves at 5.30 with Carolyn Herbert.Always fun..why not stop by for a listen..Channel 602 on your Foxtel service…that is if you have it!

Have a great weekend…