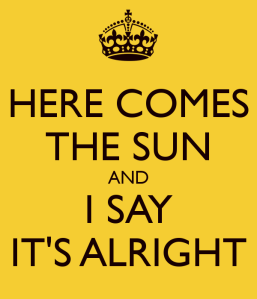 Good news, power back on…was starting to tire of the cold shower! Anyway first world problem…was getting used to candles, a log fire ,red wine and some great music…so as the sun comes out in Sydney and we start to count the cost of the biggest storm in decades everything is right in the world..

I have been saying for a few days(maybe weeks) now that maybe Jokin’ Joe called the bottom in the Iron Ore price when he suggested it was going to $35 last week…I mean this guy should know…after all he has been a politician all his life and has had the benefit of all the information from Treasury and the experts advising him…so it was good to see that the price bounced nearly 6% last night…6%..looks like a few shorters got hurt..and all it took was news from BHP and RIO that they are cutting back on expansion plans…this is a pretty simple equation …bags of supply equals low prices..turn off some of the supply and the price will recover..now it is not going to happen in a day but I reckon even the big boys are reassessing the efficient game theory that governs the iron ore price…now up 13 % since the ten year low last month!!!! 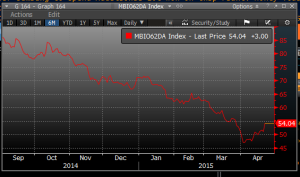 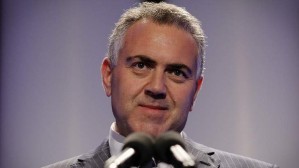 Yesterday we had a bit of a dummy spit on the inflation numbers as petrol and fruit helped us come in with inflation well below the target band of 2-3%..so rate cut? Nah …let’s face it the last one had little effect so yet another will probably do little too …except stoke the Sydney Inner city hipster property market… Pricing for a May cut remained around 52% after the inflation data and has fallen from about 75% before the strong employment data. 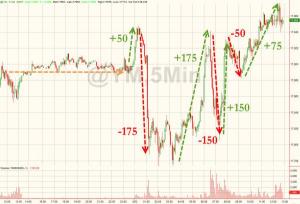 Idea of the Day-Range trading to continue…SGO and YOW two small caps with potential..

I remain of the view that the market is tired and needs to consolidate..the trading range is 5650 to 6000…stuck in the middle …Goldilocks…not too hot not too cold…but I do think we will see more nerves as we get closer to the budget…and more downside to test the 5700 level…the biggest reason though for the market to stay up is the lack of meaningful alternatives to shares..of course there is property…

I wrote yesterday about a tiddler Stream Group which manages claims and loss adjustments for leading insurers..reckon they will be busy..shares up 10% yesterday ..expect more to come..small..speccy and leveraged…expect they will need money but share price will get to 15 before they tap punters on the shoulder…

And talking of small stocks that are interesting..YOW…yup that’s Yowie choccies to you…the Kinder surorise like egges that sell at the checkout…well these guys are doing well in the US with their Walmart Trial and now the other market the Middle east is also shaping up with some good news this morning..choccy is good and one of the few companies allowed to sell eggs with a toy inside….stock has bounced from mid 50s to mid 70s as the news momentum grows…would expect to see more gains to come..capped at 105m bucks so its substantial..would expect to see the recent high taken out in the next week or so …85 here we come…

Things to make me go mmmmmm!!!

In the UK ,Tesco has reported a £6.4bn annual loss, the worst in its 96-year history, after the retailer’s sales slumped and an accounting scandal emerged.They wrote off 7bn on their property portfolio…I thought property was on the rise in the UK even commercial property!!

BHP Billiton has become the first of the world’s three iron ore giants to pull back on expansion plans in the face of sliding prices, announcing it is reassessing plans to increase the capacity of its West Australian operations.

The drug sector is heating up…on Monday Teva, an Israeli maker of generic drugs made an unsolicited US$40 billion offer for Mylan, a Netherlands based rival. Just hours later, Perrigo an Irish company that makes store brand drugs, rejected a US$29 billion takeover that Mylan offered this month.

Looks like Fortescue has tapped the bond market at even worse terms than they rejected a few weeks ago… Sole lead JP Morgan(after Credit Suisse stuffed it up last time) launched a 9.75 per cent US$2.3bn senior secured seven-year non-call three bond at a discount of 97.608 to yield 10.25 per cent.

How does one bloke in the suburbs of London with a dodgy spreadsheet and an idea bring the worlds most sophisticated market to its knees..well that is what is alleged by US authorities!! “A British man helped to trigger a £500bn US stock market crash by manipulating financial markets on a massive scale from a suburban London semi, US prosecutors have claimed. Navinder Singh Sarao is accused of fraudulently making £27 million by using computer programmes to create fake trades on markets linked to the Chicago Mercantile Exchange.” Give us an enormous faith in the markets..he is being prosecutued buty the algo traders that never lose money are being floated on the exchange!!!

The runaway train …. The Shanghai comp gained 104 points or 2.44% to 4398…this is despite measures to curb margin trading and enable short selling…only going one way… 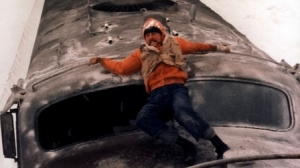 The issue with a runaway train is it usually ends in a wreck!!

According to one of the experts in the Fracking biz in the US …half will be gone by years end!!

Only one day after the Saudis announced “Mission Accomplished” in Yemen …they have started bombing again…in “Mission Restarted!!Or “Mission Impossible”!!

Surging numbers of students, tourists and workers on short-term visas mean that as many as 1.9 million foreigners are likely to be in the country at any one time over the course of 2015, according the Department of Immigration.

There is shift in the ethnic composition of new migrants away from Europe towards east and southern Asia.

The number of Chinese-born Australians has more than tripled to almost 450,000 in the space of two decades…Those born in India has risen more than four-fold in that time, to almost 400,000.

Those numbers compare to about 1.2 million born in Britain and more than 600,000 in New Zealand, as part of an overall foreign-born population of 6.6 million.

The huge influx means a higher proportion of the population was born overseas than at any time since the gold rushes of the 19th century.

While reading an article last night about fathers and sons, memories came flooding back to the time I took me son out for his first pint.

Off we went to our local pub only two blocks from the cottage.

I got him a Guinness.

Then I got him a Kilkenny’s, he didn’t like that either, so I drank it.

I thought maybe he’d like whiskey better than beer so we tried a Jameson’s, nope!

In desperation, I had him try that rare Redbreast, Ireland’s finest.

He wouldn’t even smell it.

What could I do but drink it!

push his pram back home.

Have a great day…