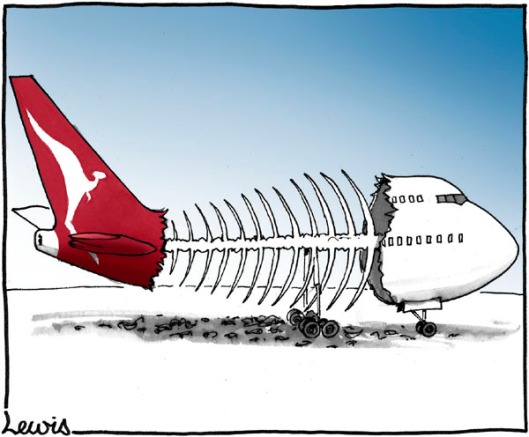 It has been a long week for analysts with reports falling faster than federal MPs with citizenship issues. Another big day in store as we head into the last week. QAN will be a focus. Looks good..Joyce has done a great job. Headline a bit low but buyback and outlook good.

We also get some Chinese data and tonight Yellen and Draghi speak. Not much to go on from international markets so expect the headline ASX200 to go nowhere really. It’s all about stock picking at the moment. Extreme individual stock volatility continues. Witness the take off yesterday of Flight Centre (FLT). Heavily shorted with nearly 9% of its shares sold short. The market latched on to the comment from the CEO that the end is in sight for heavy flight discounts. And off to the races. Not sure it is really up to FLT, still seems to be extraordinary offers from airlines on flights to exotic places. The rise of the Chinese airline has disrupted this market and we the consumers are the winners. Whilst FLT continues to power ahead there are sceptics out there. Expect some broker upgrades and as usual the market will push prices beyond the rational. Earlier this year you could not give away the stock in a packet of cereal as its bricks and clicks strategy came into question. Traded at 2800c. Now nearly 5000c. What has changed? Perception and maybe the outlook.

This weekend is the Jackson Hole Symposium for central bankers. A key moment for the markets apparently. Unlikely to really be a key moment, as central bankers are a very guarded bunch and we are really unlikely to get much from either Draghi or Yellen of significance. The markets though continue to ‘summer slumber’ and sleep walk into a period of increased risks. Trump was busy at the key board again last night berating his fellow republicans about their failure to repeal Obamacare and the looming battle on the US debt ceiling. This is about politics not action and the markets for the time being are prepared to ignore this and focus on the prize which is tax reform. There are still hopes for this. However, one other plank in the Trump narrative was infrastructure spending. There was talk of trillions of dollars being spent to upgrade US ageing infrastructure. Well maybe not trillions, but a huge unclear amount. Given that Trump cannot even get agreement on one of his core promises to build the wall, then it seems that crucial infrastructure spending is still some way off. In this environment, the US market does look risky at the moment. Maybe when the bosses return from their summer sojourn in the Hamptons, we will see more conviction either way. In the meantime, the summer drift will continue. Buy the Dips still the strategy until further notice.

Not Just Jackson Hole but the Phillips Curve

So back to Jackson Hole and the role of central bankers. Inflation, as measured by the official numbers is dead. Really? Anyone that has opened their power bill recently or even the rates bill has seen that inflation is not dead at all. It is alive and well just now it lives and thrives in the things that are unavoidable. Health insurance, tolls, car insurance, rates, energy and petrol. Luckily plasma TV screens are cheaper or all would be lost. Clover Moore in Sydney has berated the fact that steel has risen 43% since 2015. This apparently accounts for the blow out in costs of the proposed ‘Cloud Arch’ in Sydney Town from $3.5m to $11m.  Central banks use inflation as a benchmark for its relationship to interest rates. Yellen and her board have been focused on the Phillips Curve. This is an economic theory that says there is a link between unemployment and inflation. Trouble is that it is a bad predictor of inflation. A study by the Philadelphia Fed suggests that policy makers should not rely on the curve when gauging inflationary pressures. What is clear is the Fed has been surprised by the fall in inflation despite unemployment at 4.3% in the US. The Phillips Curve says that policy makers should keep raising rates as unemployment falls as eventually inflation will appear. The research found that rising unemployment was sometimes able to help predict lower inflation, but falling unemployment didn’t help predict higher inflation. This is a key argument that the Fed has to raise rates. If the Fed raises the rest of the world will ultimately follow. Just another rising cost for households. No wonder that consumer confidence is trending down in Australia. Ask David Jones. Yesterday the company said there was ‘no end in sight to weak consumer sentiment’. Sales fell 0.7% compared to a 7% rise for DJs to June. Not a positive for Myer (MYR) by the way. If the Fed sticks to its guns rates will rise despite inflation supposedly dead. The pace may slow but it will rise. At least one of the components of CPI is housing and rents. They will rise too. That is good for inflation after all. A somewhat circular cycle.