ASX 200 did well today to buck the 14 points of downdraft of the CBA dividend to close up 14 points at 5805. Results the focus with winners and losers scattered in sectors. BHP and Fortescue Metals (FMG) failed to inspire but industrials and health stocks shine. Asian markets ease with Japan down 0.15% and China down 0.16%. AUD still stuck around 76.92c and US Futures up 27. 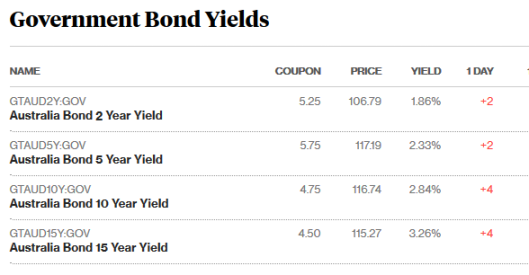 BBC News – Suicide Bombers Go On Strike
Suicide bombers in Britain are set to begin a three-day strike on Wednesday in a dispute over the number of virgins they are entitled to in the afterlife.

Emergency talks with Al Qaeda have so far failed to produce an agreement.
The unrest began last Tuesday when Al Qaeda announced that the number of virgins a suicide bomber would receive after his death would be cut by 25% this February from 72 to 54. A spokesman said increases in recent years in the number of suicide bombings has resulted in a shortage of virgins in the afterlife.
The suicide bombers’ union, the British Organization of Occupational Martyrs ( B.O.O.M.) responded with a statement saying the move was unacceptable to its members and called for a strike vote. General Secretary Abdullah Amir told the press, “Our members are literally working themselves to death in the cause of Jihad. We don’t ask for much in return but to be treated like this is like a kick in the teeth”.
Speaking from his shed in Tipton in the West Midlands, Al Qaeda chief executive Haisheet Mapants explained, “I sympathize with our workers concerns but Al Qaeda is simply not in a position to meet their demands. They are simply not accepting the realities of modern-day Jihad in a competitive marketplace. Thanks to Western depravity, there is now a chronic shortage of virgins in the afterlife. It’s a straight choice between reducing expenditures or laying people off. I don’t like cutting benefits but I’d hate to have to tell 3,000 of my staff that they won’t be able to blow themselves up.”
Spokespersons for the union in the North East of England, Ireland, Wales and the entire Australian continent stated that the change would not hurt their membership as there are so few virgins in their areas anyway.
According to some industry sources, the recent drop in the number of suicide bombings has been attributed to the emergence of Scottish singing star, Susan Boyle. Many Jihadists now know what a virgin looks like and have reconsidered their benefit packages.