ASX 200 drops 46 points to 5469 as Yellen speech sinks in. Banks and miners led across the board losses as outlook clouds and rates back in focus. Asian markets positive with Japan up 2.29% and China down 0.16%. AUD 75.50c and US futures down 6 points.

Bank holiday in the UK – Rest of Europe weaker

Since Brexit and now Jackson Hole, the rate rise risk has increased substantially. 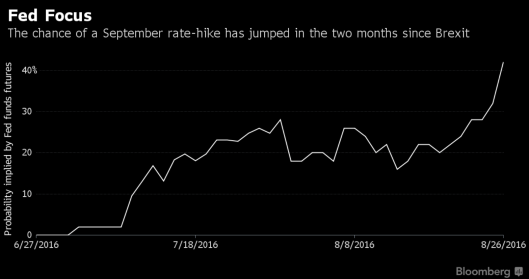 A man boarded an aircraft at  London’s Heathrow Airport Terminal 5 for New York, and taking his seat as  he settled in, he noticed a very beautiful woman boarding the plane.

He realised she was heading straight toward his seat and bingo – she took the seat right beside him.
‘Hello’, he blurted out, ‘Business trip or vacation?’

I’m going to the annual nymphomaniac convention in the United  States ..’

He swallowed hard.  Here was the most gorgeous woman he had ever seen sitting next to him, and she was going to a meeting for  nymphomaniacs!

Struggling to maintain his composure, he calmly asked, ‘What’s your business role at this convention?’

‘Lecturer,’ she  responded. ‘I use my experience to debunk some of the popular myths about  sexuality.’

‘Really’, he smiled, ‘what myths are those?’

‘Well,’ she  explained, ‘one popular myth is that African-American men are the most well  endowed when, in fact, it’s the Native American Indian who is most  likely to possess that trait.  Another popular myth is that French men are the best lovers, when actually it is the men of Greek descent.  We have  also found that the best potential lovers in all categories are the Irish.’
Suddenly the woman became uncomfortable and blushed.  ‘I’m sorry,’ she said ‘I really shouldn’t be discussing this with you, I don’t even know your name!’

‘Tonto,’ the man said. ‘Tonto Papadopoulos, but my friends call me Paddy.’
Clarence