May the forth be with you! 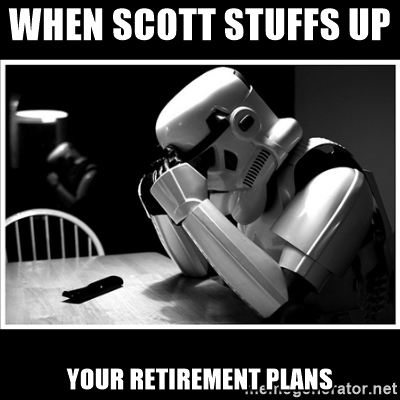 he ASX 200 Index closed down 83 points to 5271, giving back more than half of yesterday’s gains. A 140 point fall on Wall Street overnight together with concerns about world growth and the local economy faltering set the tone this morning. Iron ore fell heavily in the Chinese futures market which placed negative pressure on some of the iron ore miners today and Resources were among the hardest hit. Banks were also sold off as shareholders locked in profits following yesterday’s RBA interest rate cut. Asian markets were slightly weaker with Japan closed. AUD falls to US75 cents. Dow futures down 4 points.

BHP -9.36% after facing more problems over Samarco with a $58bn lawsuit in Brazil. Morgans says the news would continue to disappoint, which it did, given a compensation framework had already been agreed upon with Brazil’s Federal Attorney General and the two states affected. There was also heavy selling in Woolies -7.00% following cuts to broker estimates and a rating downgrade by S&P. The credit ratings agency downgraded to BBB.

But media headlines were solely focused on the Scott Morrisson “do no harm” budget. It did do some harm, mainly to wealthy superannuants. To read of our take on the budget click here.

This is the ASX 200 chart on a weekly basis showing the break of last year’s downtrend. After the 80 point fall today we are still trading at the upper end of this range…the market could easily fall 200 points and still be in a new uptrend.

Here is the latest economic snapshot from the RBA