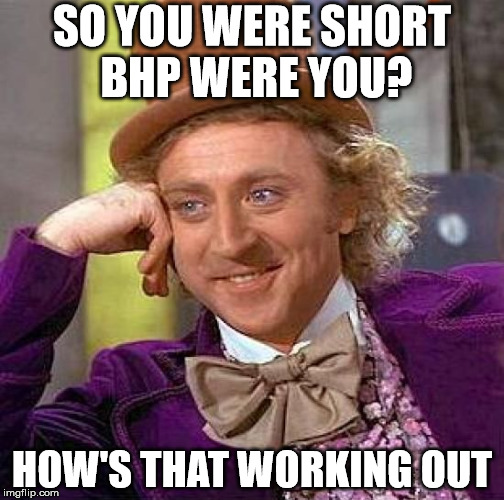 Another choppy day with central banks again the focus. The ‘will he, won’t he’ moment is building for Glenn Stevens next Tuesday, just to complicate Budget day. The market is now hoping that the evidence is enough to push him to cut by 25bps. Not so sure but we shall see. After an initial surge following better leads from overseas and a weaker dollar, the rally ground to a bit of a halt following news from Japan that the BOJ had left the stimulus program largely unchanged and had pared back estimates for growth and inflation. There is a serious issue developing in Japan. Something that seems to be lost on the markets with its obsession with all things Chinese. News of Kuroda keeping things steady as she goes were greeted with widespread selling in Tokyo and the market fell from up 1.4% to down 3% and more. Not a positive for our market which slipped on the news from Tokyo, although we steadied into the close. Safe haven buying perhaps? Perversely the yen once again strengthened. Not sure that is in the text book.

News out this morning that Bonds underwear-maker Pacific Brands is the subject of an agreed takeover by HanesBrands, valuing the company at $1.1bn. It was another positive together with updates from Blackmores (BKL), Cochlear (COH), Mirvac (MGR) and Stockland (SGP).

We were one of the few regional markets that managed to stay positive in the face of the Japanese stimulus tsunami. Volumes though on the low side.

In the last month the Materials sector has risen 14% whilst Energy is up 6%.

Will the chickens come home to roost tomorrow? Will we see a nervous end to the week? Tune in, same time, same channel, to find out how this nail biter finishes.

More grist to the mill for the RBA number crunchers.

Doing nothing was not an option. The market caught by surprise.