ASX 200 closes up 5 to 6181 as the rally fades into the close. US futures up 62. Iron ore miners once again led the charge higher as brokers upgraded ore forecasts and Chinese premier talks up the economy. BHP up 0.65 % and FMG soars up 3.0% . Banks slightly better but drifting with no real conviction. Budget may hold some surprises perhaps. CSL sees some buying up 0.7% % EOF starts life with a 70% rise. Chinese markets soar giving bulls a reason to celebrate. Fails to hold our interest. AUD slips slightly to 70.88c.

A large Harley biker is riding by the zoo in Taronga Park, Sydney, when he sees a little girl leaning into the lions’ cage.

Suddenly, the lion grabs her by the cuff of her jacket and tries to pull her inside, under the eyes of her screaming parents.

The biker jumps off his Harley, runs to the cage and hits the lion square on the nose with a powerful punch.

Whimpering from the pain, the lion jumps back, letting go of the girl, and the biker brings her to her terrified parents who thank him endlessly.

A reporter has watched the whole event. The reporter, addressing the Harley rider says,
‘Sir, this was the most gallant and brave thing I’ve seen a man do in my whole life.’

The Harley rider replies, ‘Why, it was nothing, really. The lion was behind bars.
I just saw this little kid in danger and acted as I felt right.’
The reporter says, ‘Well, I’ll make sure this won’t go unnoticed. I’m a journalist, and tomorrow’s paper will have this story on the front page.

So, what do you do for a living and what political affiliation do you have?’

The biker replied, ‘I’m an SAS soldier just returned from Afghanistan and a Liberal party supporter.’

The following morning the biker buys the paper to see news of his actions, and reads, on the front page:

His nurse, his wife, his daughter and two sons, are with him. He asks for two witnesses to be present and a camcorder be in place to record his last wishes.

When all is ready he begins to speak. “My son, Bernie, I want you to take the Ocean Reef houses.”

“My daughter Sybil, you take the apartments between mile markers 100 and Tavernier.”

“My son, Jamie, I want you to take the offices over in the Marathon Government Centre.”

“Sarah, my dear wife, please take all the residential buildings on the bay side on Blackwater Sound.

The nurse and witnesses are blown away as they did not realize his extensive holdings, and as Doug slips away, the nurse says:

“Mrs Pender, your husband must have been such a hard-working man to have accumulated all this property. 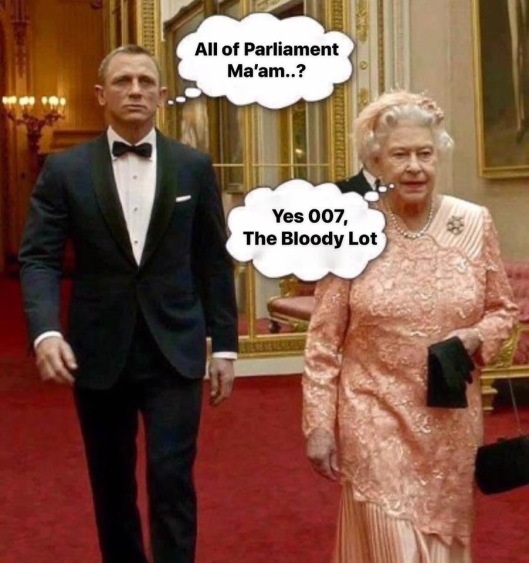