ASX 200 rallied to close up 35.5 points to 5875 in heavy volume in a 72-point range day as banks rebounded. Infrastructure and building stocks doing well on increased government spending. Miners recover as iron ore steadies. Asian markets better across the board with Japan up 0.29% and China up 0.38%. Korea the only Asian market easier down 0.59%. AUD 73.69 and US Futures down 35. 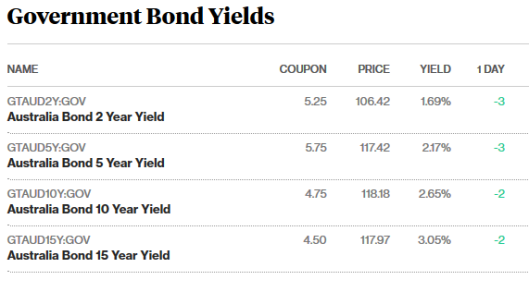 These numbers tend to get lost in all the budget talk.

HR was interviewing a blonde for an assistant position, and wanted to find out a little about her personality.
“If you could have a conversation with anyone, alive or dead, who would it be?”
“I’d have to say the living one.”

Every Friday after work, a mathematician goes down to the Ice Cream Parlor, sits in the second-to-last seat, turns to the last seat, which is empty, and asks a girl, who isn’t there, if he can buy her an ice cream cone.
The owner, who is used to the weird, local university types, always shrugs but keeps quiet. But when Valentine’s Day arrives, and the mathematician makes a particularly heart wrenching plea into empty space, curiosity gets the better of him, and he says, “I apologise for my stupid questions, but surely you know there is never a woman sitting in that last stool, man. Why do you persist in talking to empty space?”
The mathematician replies, “Well, according to quantum physics, empty space is never truly empty. Virtual particles come into existence and vanish all the time. You never know when the proper wave function will collapse and a girl might suddenly appear there.”
The owner raises his eyebrows. “Really? Interesting. But couldn’t you just ask one of the girls who comes here every Friday if you could buy HER a cone? You never know… she might say yes.”
The mathematician laughs. “Yeah, right. How likely is THAT to happen?”