Can you believe that I wrote the Trump fest fails to inspire yesterday! Doh!

May have failed to impress us but it sure impressed the US investor!!!

ASX 200 closes on a high up 72 points to 5777 as US markets soar and local resources and financials play catch up. Consumer and healthcare stocks also rally though Telstra under pressure. Asian markets rally with Japan up 0.95% and China down 0.18%. AUD 76.58c and US futures down 2. 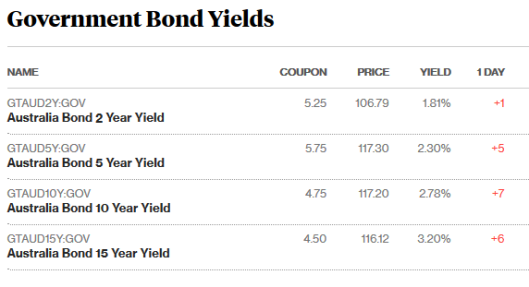 Two well dressed ladies happened to start up a conversation during an endless wait in Brisbane Airport Terminal.

The first lady was an arrogant Victorian married to a wealthy business man. The second was a well-mannered elderly woman from Mount Isa, Queensland.

After a little while Victorian woman started by saying, “When my first child  was born, my husband built a beautiful mansion for me.” The lady from Mount Isa commented, “Well, isn’t that precious?”

The first woman continued, “When my second child was born, my husband bought me a beautiful Mercedes-Benz.”

The first woman went on, “Then, when my third child was born, my husband bought me this exquisite diamond bracelet.”

The first woman then asked , “What did your husband buy for you when you had your first child?”

“My husband sent me to charm school,” declared the Mount Isa lady.

“Charm school?” the first woman cried, “Oh, my Lord! What could they teach you??”

The Mount Isa lady responded, “Well as an example… instead of saying, “Who gives a F***?”, I learned to say, “Well, isn’t that precious?”.

A visitor to Israel attended a recital and concert at the Moscovitz
Auditorium. He was quite impressed with the architecture and the
acoustics. He inquired of the tour guide, “Is this magnificent
auditorium named after Chaim Moscovitz, the famous Talmudic scholar?”
“No,” replied the guide. “It is named after Sam Moscovitz, the writer.”
Never heard of him,” said the visitor. “What did he write?”
“A check,” replied the guide.

Thanks Hans as usual..