A snapshot of today: 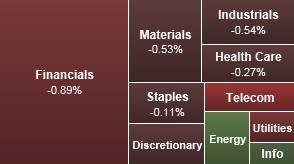 ASX 200 closes on its lows, down 32.7 points at 5193.7 as banks slip and miners stall again. Energy stocks slightly better but consolidation continues. Asian markets mixed on Russian jet downing and AUD picks up. US futures +17 as Thanksgiving approaches.

A tepid start today was hijacked mid-morning as the banking stocks and miners came in for more profit taking in a very mixed market. Selling accelerated into the ‘match out’ and knocked it to the low of the day. Low volume with only 25,000 futures traded.

News from ratings agency Standard & Poors gave the banking sector a big tick of approval, saying the regulatory and governance frameworks remain strong and the nature of the industry means that the big four will achieve reasonable return on equity without any undue risks. Seems though the market chose to focus on the caveat that banks may increase risk in order to achieve growth. Unlikely given their conservatism.

Seems you can only consume so much. Infinite growth on a finite planet will end in tears.

Singapore’s economy grew more than initially estimated in the third quarter as services helped offset a decline in manufacturing amid slowing growth in China. GDP rose an annualised 1.9% in the September quarter, up from a fall of 2.6% in the June quarter.

Ahead in European Markets

Interesting to see whether base metals can consolidate gains tonight.

US weekly jobless claims out tonight.

Trust the Italians to come up with a plan so cunning it should be called a fox. In response to the attacks in Paris, the government is planning to give 18 year olds EUR500 to spend at theatres, concerts and museums. Genius.

All eyes on the Turkish/Russian relations tonight but at least Bindi Irwin has won Dancing with the Stars.