A snapshot of today:

ASX200 closes up 37.4 points at 5103.6 on a low volume rally which seemed to wither on the vine as the day wore on before a late push. Conviction still lacking with banks struggling to make ground. China rallies 1.1% as Xi Jinping touches down in the US and defends economic stewardship. US futures down 16.

A relief rally after the bloodbath of yesterday…but lacking any real conviction. After a rush at the open we saw the market settle back – banks underwhelmed and energy stocks shone. A late rally saved some blushes, as mid afternoon we were only up 10 points.

In consumer confidence it looks like the Turnbull factor has helped with an 8.7% jump in the ANZ-Roy Morgan weekly confidence survey. It is now sitting above the long term average. It will be interesting to see if this warm glow lasts.

This is what is currently spooking the cattle. Our current biggest fear is the slowdown in China. 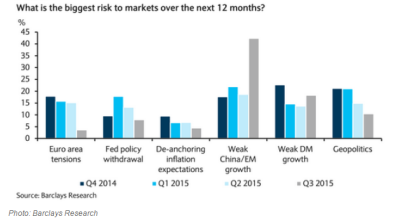 Looking at unofficial gauges of activity things seemed to have stabilised.

Online interest in small and medium sized business is seeing a rebound according to Baidu which handles 6 billion net searches every day.

Tonight,all eyes will be on the continuing fall out from Volkswagen as it has admitted to cheating its emission tests in the US. The scandal is spreading to Asia as S Korea vows to get tough if problems are found in their cars there. The company is facing fines of $18bn after admitting it installed software to deceive regulators.It seems that Volkswagen are not alone. Or at least that is the concern of German car makers which could really affect the industry and their reputation.VW is being re-christened ‘Very Worried’.