Normally, or rather abnormally, a bad set of economic numbers from the US ,a mega merger and some weakness in the USD are enough to get the market excited about things..not last night though as the Dow collapsed 300 points. Blame semi –conductors and Biotechs….expect more downside today with a fall to say 5925 as the banks slide a little…RBA talk yesterday still suggests that Uncle Fester will bring down something Draconian to take the heat out of the property market…as a result I still favour selling calls on the banks as I believe the upside is limited from here…anyway we shall see.

Looks interesting for a double top perhaps? So Patience..I know it’s hard but discipline will be rewarded…

Now we all know that the stock markets around the world would be nowhere near these levels if it wasn’t for the Central Banks…certainly looking at the underlying economies of Zombieland, the US, South America(Brazil is a shot duck) Russia and Japan it is hard to see why there is so much optimism…lots of free money chasing too few assets and pushing up prices unsustainably…at some stage this will end…and end badly..but everyone thinks they are so smart this time round that they will be able to slip quietly away from the party before the cops come knocking ,ambulances are called for vomiting teenagers(hedge funds) and parents come back to find the kids have trashed the joint..

I remember as a young man..yes that far back…the UK economists were obsessed about Money supply and inflation…not so anyone..money can just be created out of thin air and slooshed around like confetti..M2 is ignored(that’s what we used to look at ) and inflation is dead..long live zero rates…at least until the US raises in September..

Lots of rumours in the media about Ardent Leisure..new CEO with shock departure of previously loved CEO ensuring the Private Equity players are running the slide rule over this one..quick refresher…they run theme parks,bowling alleys and health clubs..nice dividend of around 5.8% in a domestically facing business in need of some TLC to bring out its best..perfect for a takeover…

From the charts….Trying to bounce..not convinced yet but under 215 a buy for sure…

Things to make me go mmmm!!!

Not sure which is bigger news ,Jeremy Clarkson or One Direction? Hard to see Clarkson staying in the wilderness for long…love him or loathe him he is a money making machine…

“Zero interest rates are no longer appropriate for the US economy. If we don’t start normalizing monetary policy we’ll be badly behind the curve two years from now”

James Bullard , the head of the St Louis Fed.

NSW Election this weekend…I wonder if anyone would vote if it wasn’t compulsory…seems we have lost faith in most of our Politicians…sad really…I live in a 100% Blue Blood seat of Pittwater..as a result we get nothing…our local member comes out once every four years and stands at a bus stop chatting to the random religious people who are there flogging pamphlets on the end of the world..seems both are reading from the same bible?..anyway I have a theory that the only way to get stuff, like Hospitals, NBN or infrastructure like trams (yes we used to have them to Narrabeen) is to make every seat a marginal one and make the buggers fight for our votes…as a result I always vote for someone strange..hopefully an independent but they are no where to be seen …not even at the bus stops…Greens? ..they have a poster (on sustainable paper no doubt) and Labour have given up ..so bound to end up with Rob Stokes again …who? Yeah I know…

Meanwhile the UK goes to the Polls in May..some would say they have already gone to the Poles…

Remember Sgt. Bowe Berghdahl from the US Army that Obama swapped for five Taliban prisoners..well the US has now charged him with desertion..good swap then!!

Over in the US Kraft is merging with Heinz to create …….

3G and Buffet’s Berkshore Hathaway have announced a meeting of minds with a huge deal for Heinz to take out Kraft in a $46bn deal…now third largest food company in the US and seems to be no Anti-Trust issues to hold it up…Warren seems to love his fast food…Coke, Burger King, Jell-o  and Monster Drinks

Semiconductor and biotech shares slide more than 4 per cent, and the dollar slipped after US government data signalled the US economic expansion was slowing.

Recent listing Lovisa Holdings has made its first offshore acquisition, buying a chain of 21 fashion accessory stores in South Africa for $2.2 million….has been a market darling and rightly so I suspect…great code too..it must be LOV LOV LOV! Issued recently at $2.00 now around 2.40 so going well..one of the few retailers that are…cheap, fashionable tat …but the formula works!

Bank of Queensland has announced that first-half after tax cash earnings rose 19 per cent to a record $167 million.

Apologies in advance but it’s too good not to use!!!

Have a great Thursday 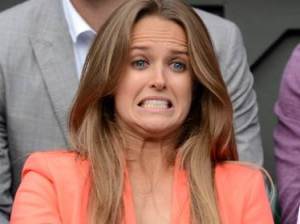