Must admit I am scratching my head a bit after the shenanigans from Canberra…these guys seem to have lost touch with the real world…anyway Budget should be a doozy..not of course that they have got through the last one..good that they aren’t going to change Medicare without the Doctors approving..isnt Medicare run for the benefit of the patients rather than the doctors..anyway…

After 12 straight days it was hardly surprising that the market broke its streak yesterday but only just..after a dismal day a late rally ensured only modest losses..Overnight we saw Iron Ore get slapped again ..Chinese New Year will not help and should see it below $60 a tonne very soon…alarm bells will ring..talking heads will talk about the end of days and when everyone else is bearish we may start to see it stabilise bit like Oil did…

The Greek question continues to dominate as the new Government has set itself on a collision course with the Troika..this one has a long way to go yet and suspect it will not end well…Greece could well leave the Zombie Zone..and go back to the Drachma…worst case..certainly worst case for Greece and the Euro experiment…it is a gigantic game of chicken really and places like Italy will be watching with great interest…

So where is our market heading…I think down ..I believe that we will have a small pullback..maybe the 12 day rally was in the hope of a change in PM..maybe it was just the overseas shorts falling in love with Aussie yields ..or maybe the hope of lower interest rates from the RBA..whatever it was, its gone now!!…It has passed and we are trading at dizzy heights given the state of the real economy..that’s apart from the banks…5814 people…5814!!!I reckon we could drift back in a lazy way to 5600 and then back to buy territory…very overbought and concentrated at the moment…FOMO is strong…

So what’s next..a little bit of patience required..still hard to find value at the moment..when I do you will be the first to know!!!

Actually TLS are starting to look interesting..have been hit back to 650 ..maybe the Foxtel biz is a little worried about Stan, Netflix, Quickflix and other streaming services …they do seem to have cut the price for the basic package a lot but if by some chance TLS get back to 640 I would be loading up in size my fine feathered friends..I reckon these b abies will go to $7.00 later this year but buying on the dips is a way to go…results soon and the div too!!

Things to make me go mmmmmmm!!!

Petrol at $1.20 a litre..when it costs less than Coles Milk it’s time to load up!!!Big bounce from that buck a litre level!!

Greece and the Zombies!!!

Did I really read this..Samsung have warned people not to talk in front of their TV sets as it is listening…apparently the new smart TVs can understand what you say ,not only when you change channel with the TV(what too lazy even for a remote!!!) but also when you reveal personal information…Orwell was right!!!! 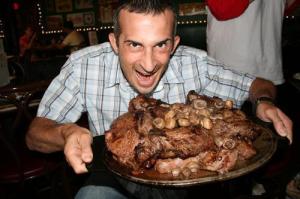 That Gail Kelly has done awfully well…I think the banks would run themsleves really but she has made nearly $80m!!!I guess the hard thing is getting to be CEO and staying there not actually running the bank..that is the easy bit!!

Bionic ear maker Cochlear said its half year net profit after tax, more than tripled to $71.4 million thanks to newly launched products, coming in ahead of analysts’ expectations of $69.6 million….Aussie dollar would have helped too!!

No dividend for poor Bradken shareholders.. Bradken has posted a 64 per cent drop in underlying profit in the six months to December 31.The company’s underlying net profit after tax was $13.8 million, down from $38.1 million in the previous corresponding period. I

Mayne Pharma is raising $100 million via a rights issue.Looking to buy back distribution rights to some of their top selling drugs.

Ukraine is getting worse and looks like the US and Germany will NOT be stoking the conflict by supplying arms to them..Ceasefire seems to b e a complete joke!!!

A married couple were on holiday in Jamaica . They were touring around the market-place looking at the goods and such, when they passed a small sandal shop.

From inside they heard the shopkeeper with a Jamaican accent say, ‘You foreigners! Come in. Come into my humble shop.’

So the married couple walked in.

The Jamaican said to them, ‘I ‘ave some special sandals I tink you would be interested in. Dey makes you wild at sex.’

Well, the wife was really interested in buying the sandals after what the man claimed, but her husband felt he really didn’t need them, being the Sex God that he was.

The husband asked the man, ‘How could sandals make you a sex freak?’

Well, the husband, after some badgering from his wife, finally gave in and tried them on.

As soon as he slipped them onto his feet, he got this wild look in his eyes, something his wife hadn’t seen before!!

The Jamaican began screaming: ‘You got dem on de wrong feet!’

Have a great Tuesday..