Strange days indeed…US markets continue to push the boundaries albeit at a crawl while the rest of the World seems to be falling apart…more bad economic news from Zombieland and the UK plus China felt obliged yesterday to join the fray. Japan is printing money faster than you can say Xerox yet the US economy is going gangbusters(well relatively).The big question I ask myself is do you feel lucky? Well do yer? No sorry that is the wrong big question..the right one is will the US drag us all out or will the rest of us drag the US back in… 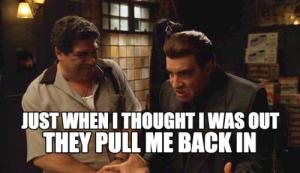 We have a recession in Japan, close to recession in Europe  and a cooling China…and here we are falling into a heap…the MYEFO will be a shocker…budget will be now in extreme emergency and Smokin Joe will be looking for wriggle room and weasel ways to raise some money…maybe sell some more assets …GST? Anyway the sad fact of life is we are no longer looking quite such a lucky country …dodging the bullet of the GFC may have been just that dodging but the bullet seems to be heading back our way…meanwhile our leaders are fiddling…RBA is preoccupied with housing and talking the dollar down (there goes the benefit of lower oil) …why don’t they just put in place restrictions on lending to SMSF and Investors and that will take the sting out of the market.

So today we will get a small rally..Gold up ,Iron Ore up!!,Oil up and the Dow up and we have ben dreadful recently so book squaring and short covering will help us back up…I think though the slide will continue next week…Tuesday is Medibank Day …mums and dads will be rewarded with a pittance of shares but a good premium…hedge funds and the hot money traders will be all over this one as it is the closest thing to a guaranteed pay day that they could get…every small fund pulled every favour to get stock then the big boys have bid it up and voila ..free money!!

For the week we are down around 130 points..should get back 20 today but still dismal…maybe the hedge funds are shorting our market against their Medibank allocations…

Idea of the Day-WOW-In BUY territory 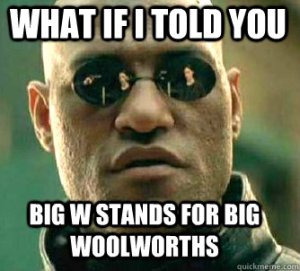 This baby has had its blue chip hue somewhat tarnished…but this one is starting to look pretty attractive…the rise of Aldi and Costco is overstated..the problems with Masters are real though but not a massive problem…Dan Murphys kills Liquorland…yield is looking attractive on 15 times earnings in a consumer staple with defensive qualities…Uncle Waz always likes buying great quality companies when they have temporay issues..this one fits the bill…I rate them a buy at this price…31 bucks is the cheapest it has been for a long while…get back in there Mortimer!!

Should be fun and games today in retail land with Myers, Kathmandu and Billabong AGMs…not sure we will hear any great news..

It’s snowing in the US…now I know it’s lovely to be out there building snow men for Thanksgiving..but the last time they had this kind of snow it really impacted their economy!!Just saying… this really whacked their GDP…

Clive Palmer walks out of yet another interview…just gold…should put him with that woman from First Contact…a match made in heaven.

BHP yesterday backed their business strategy of pumping as much Iron Ore into the dwindling market as possible…seems it is still one of their most profitable businesses.Is this madness…shareholders seem to think so!!

Goldman Sucks fired two bankers after one of them allegedly shared confidential documents from the Federal Reserve Bank of New York within the firm.

Good to see the Homebush ANZ stadium has put its hand out for tax payer money to make it have a better vibe..$250m ….sure it is a great use of money..who needs schools, hospitals anyway…

Fast fashion jewellery retailer Lovisa closed its bookbuild on Thursday afternoon, ahead of a listing. The initial public offering price had been set at $2 a share, and it’s understood there was strong demand from local and international fund managers. The offer raised $110 million and Lovisa will have a market value of $210 million…never heard of it..that is sad isn’t it!!

Nine month low in Zombieland consumer confidence. The flash US manufacturing PMI dipped to a ten-month low of 54.7, down from 55.9 in October. That means the sector is growing at the slowest pace since January.

Going to be a big week for the banks with the long awaited Murray report coming out…should be much like the Henry report …remember that? You should never hurry a Murray! Government then has a while to work out to do very little..the whole FOFA thing is now getting to be a joke…don’t know whether they are coming or going…

Ukraine is going well…NOT…inflation is now 20% and going higher ,the government is raising the price of natural gas to meet the terms of a $17 billion international bailout and battling an economic contraction that the central bank estimates will reach 7.5 percent this year.Hard to justify leaving the warm embrace of mother  Russia and jumping into bed with Zombies instead…how long will people put up with it?…who knows but they are no stranger to inflation ..it peaked at 10,000% in the 90s!!Maybe japan should take some lessons!!!Or maybe “Do Nothing” Draghi will import some Ukrainian inflation to help his grand experiment in rhetoric..

A group of chaps, all aged 40, discussed where they should meet for a reunion lunch. Finally it was agreed that they would meet at Wetherspoons in Parramatta because the waitresses had big boobs and wore mini-skirts.

Ten years later, at age 50, the friends once again discussed where they should meet for lunch. Finally it was agreed that they would meet at Wetherspoons in Parramatta because the food and service was good and the beer selection was excellent.

Ten years later, at age 60, the friends again discussed where they should meet for lunch. Finally it was agreed that they would meet at Wetherspoons in Parramatta because there was plenty of parking, they could dine in peace and quiet, and it was good value for money.

Ten years later, at age 70, the friends discussed where they should meet for lunch. Finally it was agreed that they would meet at Wetherspoons in Parramatta because the restaurant was wheelchair accessible and had a toilet for the disabled.

Ten years later, at age 80, the friends discussed where they should meet for lunch. Finally it was agreed that they would meet at Wetherspoons in Parramatta because they had never been there before.

Have a great Weekend…back on TV at 12.00 for lunch money..call in with a question!!Love to chat!