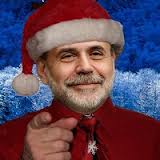 Good economic numbers out of Zombieland and the US helped Santa find his sleigh…just the FOMC and the MYEFO to get through then….expect a positive day..let’s face it everyone is happier when the market goes up…so its in all our interests…right? Anyway historically this period through to mid-January is very strong before we get the profit taking and the worries about February Company numbers…there is a shed load of money coming from Bank Divs in the next week which will help but think my 5600 looks remote I have to say..even with a benign FOMC etc it’s a big stretch so sorry was too optimistic…

Placement from IAG to raise $1.2bn sucks a little liquidity out of the market though as they look to buy WES insurance underwriting business.

Usual suspects will rally early but not sure it will follow through until GI Joe gets out there and tells us it was all the other guys fault! Thin markets will allow some exaggerated moves as we wind down for Xmas…although it is Triple Witching in the US on Friday and we have December expiry here on Thursday too…so plenty more fun to be had in 2013!!!

In house tech conference today with QFX ,FLN,NTC ,OKN and OTH….should be interesting as these stocks have all been pretty good this year…

Yesterday also saw the rise of the shorts…as we approach the end of the year and books being squared off the sectors most shorted could have a bounce..mining services and golds may be benefitting…MND rose 10% yesterday so expect this sector to improve as we head into Xmas…stick to the big ones..if you feel the need..BLY may be worth a short term punt…back up to the 40s perhaps…

Things to make me go mmmmmm!!!

The business establishment has demanded that Treasurer Joe Hockey swiftly repair the budget as he prepares to release a mid-year update on Tuesday forecasting more than $120 billion in deficits over the next four years and no surplus for at least a decade.

QANTAS says new government figures showing its market share on routes to Australia plummeted by 15.5 percentage points over the last decade are a result of increased competition rather than cutbacks.

Now I know the Murdoch press are screaming about the Labour Debt time bomb…they would …but if its so bad lets see a decent plan to get us out of this mess before it’s too late..over to you GI Joe.

SENEX Energy has attacked AWE for its handling of a friendly $750 million scrip-only offer for the oil and gas group. Managing director Ian Davies said that after approaching AWE last Wednesday, he did not “expect the potential partner to leak it all over the world”.

Seems that at least one Banana Republic is open for biz as Mexico has thrown its Oil industry open to all!The Mexican Monopoly is over and the Oil rush begins..US and Canadian firms will be in the plum seat but expect BHP will be able to get in there too… looks like it would put Mexican output at 5 million barrels a day, an unprecedented level for Pemex, the state oil company created during nationalization in 1938.With US production to expand to 9.5m barrels a day in 2016 it should be enough to push oil prices down to the high 80s perhaps.

Uncle Ben was in  festive mood at a do to celebrate the 100th anniversary of the Fed…this is what he had to say.. “One value that strikes me as having been at least as important as any other has been the Federal Reserve’s willingness, during its finest hours, to stand up to political pressure and make tough but necessary decisions,”…nothing on the Taper though…

Although anniversary today is the Boston Tea Party…now was the trigger for the American war of Independence and has huge relevance to us downunder as without losing the war the British would never have sent their convicts here..they would have kept sending them to the US.What many people don’t realise is the whole Tea Party thing was triggered by a failed bank in eth UK which required bailing out byu the Giovernment which in turn had to tax the colonies…see it all starts with bloody bankers!!!

Bitcon took a pounding last night as the Chinese authorities moved to ban third party payment providers from  taking them..

And as Bitcon falls so does Gold and Silver rise!!! 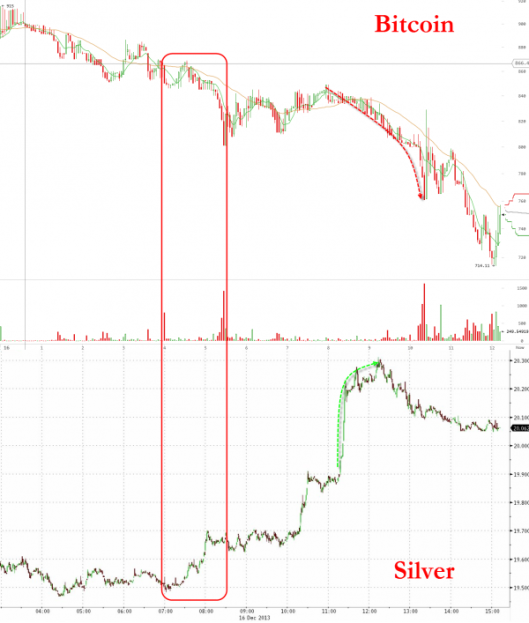 US industrial output surged 1.1 per cent in November, the Federal Reserve reported, with manufacturing showing a fourth consecutive monthly gain.

Apparently it is mission accomplished in Afghanistan…just not sure what the mission was though..

Germany’s solid PMI reading of 55.2 underlines the country’s central role in driving the improvement across the region. The country’s manufacturing industry continued to gain new orders after a rather weak start to the year. The services sector also continued to expand. However, France was a very different story, with its PMI reading falling to a seven-month low of 47.0. The figure suggests an accelerating contraction, and point to a decline in economic activity for the current three-month period.

Bit of action on the good old Fear Index (VIX) in the US which has pushed up to 16 pre FOMC ….was languishing around 12 for some time!!!

small  accident I had with the Ute when I turned into our driveway.

Fortunately it’s not too bad and I really didn’t get hurt, so please don’t worry too

I was coming home from Byron and, when I  turned into the driveway, I

accidentally pushed down on the accelerator instead of the brake.

it bumped into your new car.

I am really sorry, but I know with your kind-hearted personality you will

forgive me. You know how much I love you and care for you my sweetheart.

I am  enclosing a picture for  you.

I cannot wait to hold you in my arms again.

Have a great MYEFO day!!!